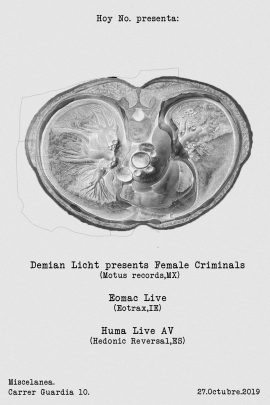 Ian McDonnell a.k.a. Eomac, also known as 1/2 of electronic duo Lakker, is an artist, composer, producer, label owner and DJ. He has released genre-spanning music via The Trilogy Tapes, Stroboscopic Artefacts, Bedouin Records, Killekill and recently his own Eotrax imprint. Alongside this he is one half of duo noeverything with producer / vocalist Laura Kilty (aka LAIR) and a number of other collaborations yet to see the light of day. As a DJ and live performer he has played across Europe, Asia, US, Canda and Latin America at festivals such as Mutek, Atonal, Norberg and Unsound, and in clubs such as Berghain, Tresor, Concrete and Circus Tokyo. He also presents a monthly podcast, exploring sounds old and new from all over the world. All of this activity has garnered support and attention from far afield and Eomac can count the likes of Thom Yorke (who included a number of Eomac tracks in his ‘Moon Shaped Pool’ release playlists) and Aphex Twin among his many fans.
His 2016 LP ‘Bedouin Trax’ LP drew from obscure Middle Eastern music, digging deep into a dark mysticism for the dancefloor. 'Bedouin Trax' part II is already in the works, and this year he has released a new album ´reconnect' on Eotrax - which continues his exploration of the furthest reaches of physical, visceral music for body and soul - and a collaboration series that includes Paula Temple, Demian Licht, Seán Carpio and Kamikaze Space Programme.

Demian Licht is a music / film producer and professor of music technologies. Her passion for music led her to the field of electronic music in 2005 by studying audio engineering and music production as a teenager in Mexico City.
Her well received Female Criminals trilogy released through her own label Motus Records alongside her cinematic live performances & Audiovisual shows positioned herself within the international electronic music scene. She is the only women Ableton Certified Trainer in Latin America.

Huma is Andrés Satué's personal project, half of the duo Esquelas that released at labels such as Ensmble, Bestiarie and Matapadre. He participated in the Red Bull Academy BassCamp in Madrid in 2015, and also is co-founder of Hedonic Reversal, Versal and the Bicefal Festival.
After releasing his first EP "Las tres fases del movimiento" in 2016, which lead him to play at Sónar, Bicefal or WOS music festivals, he now releases his second EP "Yocto / Yotta”. A two track EP which will be the third release of Hedonic Reversal, and will be edited as a 12" vinyl special edition limited to only 20 copies.
The project in live and studio focuses on converting reflections and ideas into sound in a narrative way, using elements ranging from classical or ambient music to metal or drone, creating an intense and precise symbiosis between them.