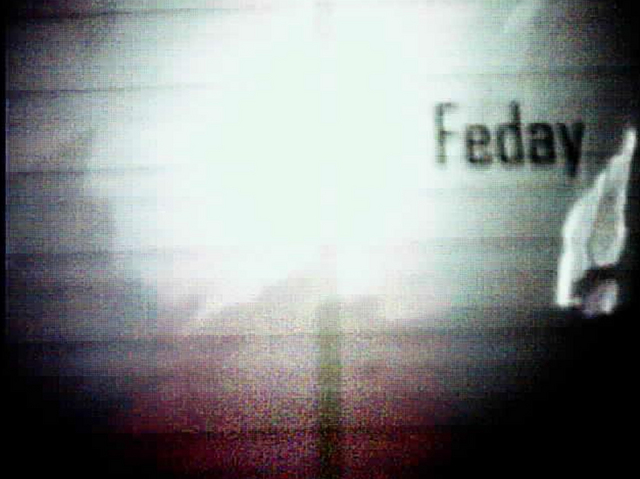 Â¯ CINEMA EAR
ELECTRONIC CINEMA (Encounters at the Vanguard)
"In nature we never see anything isolated, but everything is in connection with something that is in front, beside, below or above " (Goethe)

CINE-EAR is to provide partial answers to these questions bringing together two ways of understanding art, a visual and a sound separated in time by nearly a century and united here in this proposal.

The earliest known use of music in film dates from the end of 1895, when the Lumiere brothers inten Taron test the commercial value of one of his early films. That 'premiere "with piano accompaniment was held at the Grand Café on Boulevard des Capucines in Paris. Since then the orchestra became the usual accompaniment wherever projection of movies.


Feda and is one of many projects from Synthetic Mouse, electronic musician from Seville experimental scene since the late 90s. Here he comes to propose his particular "miscellaneous " dark and minimalist electronics, building on sound foundations such as flamenco and Andalusian Arabic traditional music.
In our exercise of review and update of that concept, the vanguards of the early pioneers of silent films from the early twentieth century (constructivism, expressionism, futurism, surrealism etc..), and explorers sound of electronic music of the late twentieth and early twenty-first century , there are meeting in the same space, mutually enriching and providing the viewer in a new light, both visual and auditory for your enjoyment.

What for many viewers is watching old silent films, an exercise in cinematic archeology, this proposal will come to new life and another dimension to be being interpreted within the framework of a new language is to sound like the m & uacute; experimental electronic music, perhaps closer, more aesthetic-ideological approaches to the same authors of these.
In short, we are replacing the old figure of the pianist of room for a DJ or electronic musician who will direct the movie playing.

Fedayin is one of many projects from Synthetic Mo use, electronic musician from Seville experimental scene since the late 90s. Here he comes to propose his particular "miscellaneous " dark and minimalist electronics, building on sound foundations such as flamenco and Andalusian Arabic traditional music.