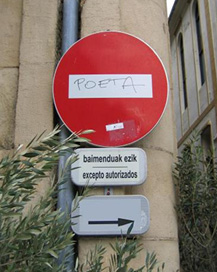 Rachid four Lamartí
& nbs p;
John Soros five Moved to Barcelona a version of the last session of poetic research cycle organized Mad last February rid the poet Maria Salgado, under the name ZCTZ, ZI (R) C (U) LO (IN) STABLE CHALK.
The poet invited to conduct that session was Eva Chinchilla, who in turn called for collaboration with other actors and poets from across the Peninsula: Jesus Barranco, Blanca Fernandez, Anjelica Maria Fern ; ndez, Mercedes García Carrasco, Rachid Lamartí, John Soros.
The experience so rich and unique as each tortilla, was intense, so do not think twice about this opportunity to live in Barna. Out of respect for diversity and the forced reduction of the cast, adopted the new name DIOSLOSCRÍA.

Open the voice actor from elsewhere in the room who have no access. Yes the actor filmed fragmented. Will the concert, charged with the tension of actions and silences between poets is again camouflaged actor-and three simple guidelines for each creative proposals into the game, and diversify:
< br /> 1.La recite direction (north, south, east, west, looking or not the public)
2.La posture: standing, sitting or any other (including yogic asanas)
3.The way of saying, "recite from memory or reading? "Natural voice, reproduced, other?

These Guidelines aim to investigate the format of poetry reading, and questioning the boundaries between theatrical and poetic.
We ensure that the public will find a role distinct from poetaquerecita, and apply listening, that element so common among actors as low among poets.
Each participant will ignore the guidelines that your partner or the number of poems have chosen.
For this and other undisclosed reasons, DIOSLOSCRÍA not support testing.