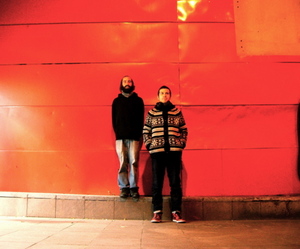 Both Simon Williams (Jahbitat) component of Narwhal, as Weimar, engine warmed towards his presence in the SONAR, through this concert as always experimental, noisy and somewhat unexpected, as they habitually do on their creations for Hard compulsive / Luv Luv .

Moreover, Espanya take the opportunity to present their mystery sas MiscelÃ¢nea blends the public at an event that promises to be lively and different.

Espanya is one of the avatars that emerged from the ashes of Dead Man on Campus, from which other bands have also appeared
Hands like Coconot and Topo. Dashiell Fernandez and Alberto Flores has long been seeking ways to realize a mode
Electr & oacu te; nica Sufi pop, and it seems they have succeeded with the help of vintage synthesizers, game console, the imaginary
Bruguera and Spanish TV morning film library. Dada digital trenches at times, at times melancholy.

For their experiments failed Cristian Subirá (Coconot, Gargamel) uses the pseudonym of Weimar. African music, glitch, Animal Collective, Acid House ... everything has a place in the songs of this type.