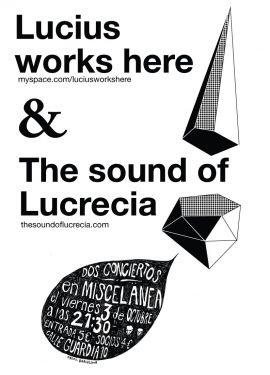 The Sound of Lucrecia (Colombia)
Lucrecia Pérez musical project between his pitches is the most important Like Being Home, a free download EP under the Colombian netlabel Series Media (www.seriesmedia.org), their live is done by itself with the guitar, midi controllers, some instruments and computer. The songs are co nstruidas sequentially and progressively, as is recording loops and structured melodies and rhythms in the presence of the public. In this regard, a presentation of Lucretia is like attending a musical laboratory, where the force, the voice, the guitar make the public feel that the music came from somewhere in his memory.

Lucius Works Here
Under the name of Lucius Works Here (Lucius works here) lies Shakira Benavides, personality of the Barcelona underground scene that stands out since 1992 for his work in the shop collectibles Wah Wah Discos and their sessions as a DJ for over a decade in many clubs and festivals of the city (Dot, Apolo Nitsa, Lolita, Moog, Octopussy, Club 22, Zeleste, Bikini, Mond Club, Abaixadors Deu, Artzai, Hotel Omm, Cabaret Club, Nuggets, Sidecar, etc ... and festivals such as Dr . Music, Sonimag, Kunst & Revolution, Sonotone, LEM, Mecal, Sonar Festival Della Creativite ..) own radio programs ( "The composition of the second moon " in Radio Contrabanada and " White and black "in Dostrece Radio) and forays into television with the program" Plan B "for BTV.
Years ago, his life and had been linked to music. With 15 years would set up a group where the lead singer and composer of the lyrics, in the late 90s coquetearía with electricity & oacu te; nica, but it was not until 2004 that finally secures his intention with the project Lucius Works Here. Also, in 2004, mandated him to do the soundtrack and sound design of the play "Medea, La Stravaganza " by Carlos Concha. In Spring 2005 is interviewed in the online magazine Acetone (www.acetonemagazine.org) and where somehow gives with Ocer your project, a fact that drives him to give his first live broadcast on the anniversary party of the same magazine the following year in Saladestar. In fall 2005 delivers a full set halfway with Ana Serrano for a compilation called B_top with musicians and producers with the dilemma of conscientious piracy finally come to light in early l 2006. Participate in festivals Femelek '06, Djs Contra la Fam '06 and LEM '06. In December last year and the current, has performed at places like the Castello room, the ship Naumon, MiscelÉnea, Convent Sant Agustí, Phthalo bal and Instinct. He has participated in a jam session of laptops in 2007 with Institut Fatima, Tree and D-Fried in The Niu. Participate in Femelek '08, and dj JERC as adding and interpreting their own production, and is also presented with a new side project formed Ladies Lazy Daisies with Io Casino in 2007. In May of this year, LiveSoundtracks involved in creating a soundtrack inspired by the documentary Earth (Alistair Fothergill and Mark Linfield) that would be interpreted along the metra je.
In its work hunting sound field recordings, samplers and monologues of European films. It's a landscaper and organic electronic music that sometimes sounds like pop and intimate others, hottest beats. Presented in May its first self-published CD 4-song EP called "A Hidden Path ", which will be preceded by the album "A Map of Soul " (Foehn Records) this fall.