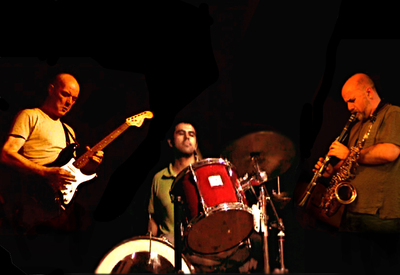 Mexpanglo formed in the active encounter between two musicians of the London scene, Dave Tucker, director of the London Improvisers Orchestra and former member of the legendary punk band The Fall.
He is a veteran improviser in Europe, America and England where he shares the stage with some of the most important innovators of this music as John St evens, John Butcher and Evan Parker and Ricardo Tejero, one of the few Spanish actively installed in the London underground scene ever restless.

Executive Member of the Spanish collective of improvisers and orchestra Musicalibre FOCUS of the London Improvisers Orchestra which he directed, and also present in different European settings of B & eacu te; lgica, UK, Germany or the Netherlands where he also addressed several times the Dutch Royal Improvisers Orchestra, joins them young Mexican talent drummer and vocalist based in Barcelona for several years, Julian Bonequi, one of the most important musicians of his country and increasingly recognized in the scene Improvisació European ion, an active member of the group and orchestra Musicalibre FOCUS.

His music springs from the search for nuances in the provocative mixture of free jazz and punk together to create energy around listening and silence, an encounter that always tries to maintain creative freedom and physical delivery but also & e acute; n reflexive around a space where they are, is as important as what they do.

The group has performed on stages and in the UK and now occurs in Spain.