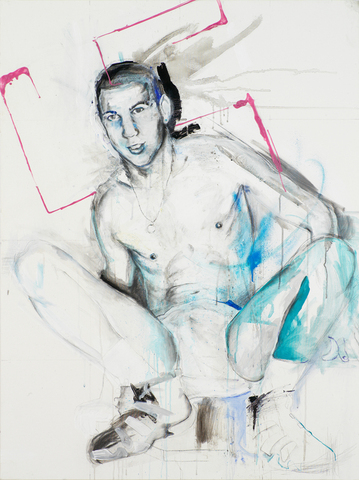 Boys will be boys

Boys will be boys is the first exhibition of young artist from Alicante Barcelona Javi Moreno. The sample series of paintings and sculptures Suite Model series reflects the male adolescent sexual awakening, in which the social burden, symbolic and psychological "be a man " becomes a role model, to the search for an identity ap ta and adapted to social conventions.

I have to look at men, which aspect should have, what jobs or hobbies they are entitled, are some of the concerns reflected in Suite, a series of portraits constructed from capture webcam gay chat conversations. Acrylic, graphite, fat bars and chewing gum on canvas reflect a uni verse homoerotic and sensual, innocent bathed in some sparkle, with an air of urban youth culture and street constituency or sexual subcultures: skateboarding, queer, Fetish bakala ..., loneliness, joy and anxiety interspersed among young people portrayed and the scenes domestic and everyday protagonists. A space for suggestions tion of attitudes and gestures that influence the search for a sexual self, in that period of search and exploration that involves teens and their need for reassurance of self from the erotic and emotional interaction with others.

Model Meanwhile, plaster sculptures that allude to the internal spaces of the body, l as gonads, viscera and the organs of secretion, complement outreach Suite posed by relating those concerns psychological and emotional sexual arousal, with the changes and hormonal and biological processes that characterize the transition from child to adult in male bodies.
Javi Moreno works in painting, drawing, sculpture, video, installation and performance. Linked to queer culture and critical thinking of gender theory, his work focuses on the factors that affect the construction of masculinity. The relationships that occur over the Internet in the information society and how they affect the type of linkages which set himself and the other, are a focal concern in his work. Adolescence, defined as a blank book whose pages have been filled in the construction of identity, is the moment that inspired its production life, convinced that the incidence and stage in the screening process involves adult individuals.