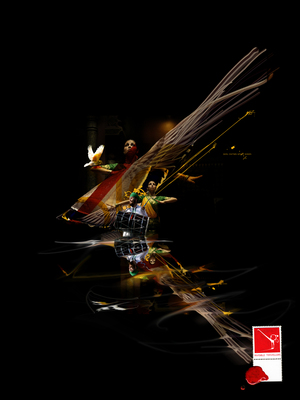 Pilot project on complicity and dalliances between a graphic designer and a musician, through which stories are presented and illustrated mental journeys sounds that accompany them.

The sources of inspiration include all the senses and mind can absorb disto rsion, seeking the pleasure of free and creative act.

Some friendships made at the onset of adolescence in Lisbon accompanying intellectual growth and artistic sensibilities similar tastes evolve into adulthood. Thus, a graphic designer who lives in Barcelona and Lisbon are inspired musician ys and provoke each other in each work.

The apparent silence of images of one and the invisibility of the sounds of other feature stories about trips (many of them mentally ...) and characters who find or imagine and all the sounds that gives them life.

"This exhibition has the special participation of Ze da Paz
(Zedapaz.com) in a picture "dream for four hands. " "

... And because we love to live in a world where everyone was always disguised as something silly and make our cities and our lives were freed from regulatory and gray people, we appeal to the insane and people of good vibes for the 28th N ovember appear at the opening of our exhibition in Miscellaneous disguise!

The best 3 costumes will be awarded new work with 1 each.

The rest will be photographed (if we were very very drunk ... or shy of course) and may form part of a future picture ... see what happens:) "