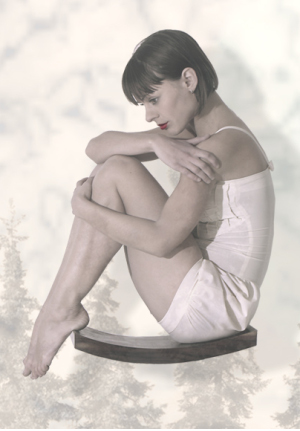 Cutting Breaks clearly intimate piece gives us a voyeuristic look almost as if we saw the character through the eye of cerradura.En waiting for something you do not know if it will, we attended their sensuality, their fantasies, his total love, his obsessions, his madness.
This time the sound will be created within the space and scenico shooting the original music for the piece live.

The establishment:
The initial desire, the engine of creation, were the emotions, the desire to explain them, to dance.
The great paradigm of around the whole issue is time, seen as one unknown lord and master that governs our lives. Then love, m iedo, judgments, disappointment, yearning and I we are in a space.
That's where the magic begins, this space will give me a beat, a body, a story beyond what I had imagined.
The idea is rounded and retro feeds between creator and creation. Think no time for that, because everything comes to me like lightning that cross the map of who I am, I will, I believe, and I imagine I recall.
Dancing as if possessed my past and present embrace, forgive, are welcomed.
At one stage game where you work with rhythm, lighting and movement, we witness the decline in the total darkness of the character.

With a massed as positivist in a dream, get to the closing, understood as resting place, acceptance, self-knowledge. We should be kind to ourselves and give breaks to those aspects of ourselves heading to a place but never reached it.

Carolina Carron, returned from the National School of Dance in 1995, continuing his training as a dancer in the area of contemporary dance with the company Contradanza, participating in shows of that comp & i acute; to comotrabajando and researching and also independently.
Conducts workshops in Uruguay and Spain with teachers such as Florencia Varela, Martin Keogh, Andrew Hartwood, David Zambrano and Lindsay Kemp.
Since 2002 he lives in Barcelona continue his training and complete dedication to dance in both the Interpreting & o acute, n as in teaching.

Fernando Lagreca is a producer and sound designer born in Uruguay.
With a career spanning more than ten years, he settled in Barcelona since 2002, where he participated in several events including the Festival Lem 2004 inVICtro in their editions # 4 # 5 and # 6, IV and V Mostra Sonora i Visual Bam04, Electromuestra, besides acting habitu alment in Latin America.
Also responsible for Greknoise recordings!, Which organizes platform since early 2005 a series of electronic art called a module.
His last work for the German label Autoplate, entitled "Colpi di sole", teaches us a new facet of the artist, with soft guitars and processed vocals, d & aacute; ndole a course a little more pop melodies asus usually full of melancholy and romance.