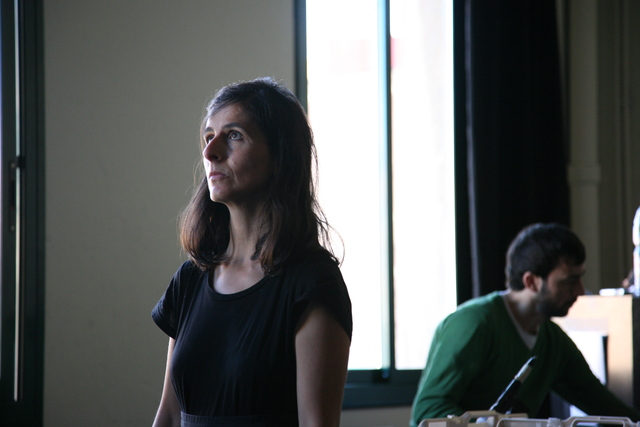 Four instruments, four bodies.
Musical improvisation and body by Ilia Mayer, Victor Zambrano, Tree and Teresa Navarrete.
The sound and movement will come together to complete an experimental evening by two of the most prominent electronic musicians and two renowned local dancers.

Photo: Rafa De Los Arcos Miguel Marin TREE
Sevilla 1974
Musician Seville Afican in Barcelona, is one of the most anxious composers of electronic music scene locally and nationally. Marin has worked and collaborated with directors, choreographers and multimedia artists the likes of Santiago Garrido and Saju Haru, among many others.

Throughout his career Ma Turin has spent twenty recording LPs to participate with their compositions in music and media festivals such as Sonar, Benicassim, Lovebytes, AvMotional or LEM festival. His most recent works have led to the making of soundtracks for films, as well as the creation of sounds for video installations, and also & ea cute n music for theater and dance. Among his many projects include the Tree, the label under which Marin has released two LPs and several singles.

Teresa Navarrete
Torreperojil, Jaen, 1971
Teresa Navarrete Contains extensive training and a prolific trajec dancística tory as the creator of the national scene. He studied classical Spanish dance at the School of Drama and Dance in Cordova, at the Royal Ballet Professional Dance Conservatory of Madrid, and contemporary dance, framework that has been developing its work in the Centro Andaluz de Danza de Sevilla, choreographed Center & aa cute; traffic The Ventilla, and in Barcelona, where he arrived in 1998 and which continued to expand its training with teachers such as Jeremy Nelson, Jordi Cortés and Carmelo Fernandez among others. His first choreography dating from 1996 and 1997 and created with Mary Cabeza de Vaca, the first and Paco Nevado, the second. With his first single, Lá Deer Grimes, released in 1998, he joined the group of creators and performers, Erre que Erre Dance, where Theresa Navarrete has spent most of their creative work. Some of these works are Divadlo disheveled Thoughts, My name is Walter, should rain crystals Apaai, Spitting in time and Lost and Safe, Junt draft Teresa Navarrete Kike Segurola or in collaboration with Miguel Marin musician and dance video work Divadlo Apaai and Mitsune. Teresa Navarrete has also collaborated with other groups like La Fura dels Baus and the company yet, and has developed teaching work. He is currently engaged in an educational project acercami ento dance to schools.
È aacute; nea Dance Academy in s. XXI, School of Alicia Marquez, Estudi Pasaje Mallol, the Andalusian Center Theater and Centro Andaluz de Danza Víctor Zambrana presents as restless creator of the current scene. She began interpreting in 1995 to participate in the dance video and entertainment Omnibus Portraits from memory, as directed s two by Ramon Oller. Since then, other names and groupings of national creation, appear in his career. These include the company Paloma Díaz, iliac Dance Erre que Erre, Senza Tempo, Projecte Hen and Lapsus. The group presents The Malquerida essential in the journey of Victor Zambrana. With ell to maintain a profuse artistic relationship since 2003 when Victor Zambrano was part of the interpretation of DNA-ID show up today. In 2008 the creator has worked in the research process Rasa, led by Lipi Hernández, director of The Malquerida. As a choreographer, Victor Zambrana signature work as Area 03 (2003), Solo (2004), selected piece in 2007 by the European network of street arts programmers, Time (2005), Reconstruction (2006) and the piece of dance-installation Point (2007). Zambrana also holds a degree in graphic design and printmaking and is the author of the image of the latest edition of Dance Month Sevilla.