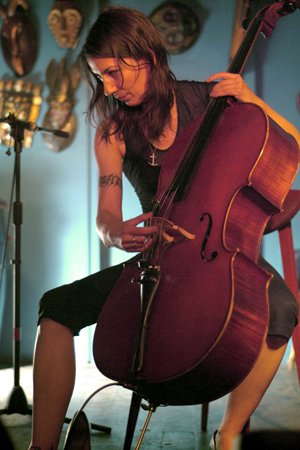 Julia Kent was born in Vancouver, Canada, studied cello at Indiana University, Bloomington, and lives in New York. She was an original member of cello-rock band Rasputina, who released two records on Columbia and toured throughout North America. After leaving Rasputina she joined Antony and the Johnsons, playing on and contributing string arrangements to the group's Mercury Prize-winning record I Am a Bird Now, and touring Europe, North America, Australia, and Brazil, including shows at Carnegie Hall and the Royal Albert Hall and numerous television appearances. In addition to her ongoing participation in Antony and the Johnsons, she has performed and/or recorded with many other artists and ensembles, including the Angels of Light, Ben Weaver, Burnt Sugar, Leona Naess, Teddy Thompson, Devendra Banhart, Donovan, Larsen, William Parker, and Angela McCluskey.. As a solo artist, she has performed at the Donau Festival in Austria, the LEM festival in Barcelona, and at venues throughout Europe and the U.S.