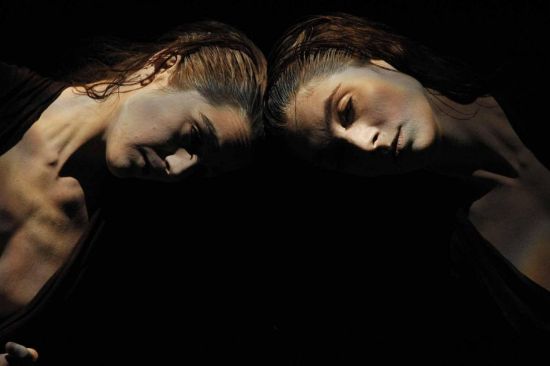 Reserved tickets will go on sale should not be taken before 19h. 19.30h. BROKEN LANDSCAPE Cranämour, Madrid

First look for a colpa (salt water spring where they water the animals ), Then there are all kinds of prey. After several days of hunting, animals become malicious. Then you go somewhere else. Evidence, for example, the path 2, then take the path 3. If you find nothing, you choose the path 4. If you did not find anything there, you try on the trail 5, where you will see traces of peccary. These will lead the path 6, where cazarás the following days. In the next moon can return to colpa, since animals have to be naive again.
C. Prohaño, Amazonian shaman

Cross the laws of physics as a breath sighs, leaving between see a life stifled by their existence and pushed beyond the obvious, beyond the senses. Pushed to a place to meet.

Joelle Gruenberg was born in Peru. He was trained in contemporary dance school in Carmen Senra in Madrid and later obtained a degree in dance and choreography at the Laban Center for Movement and Dance in London. Peruvian dances studied at the School of Folklore of the Universidad Mayor de San Marcos in Peru and in 2001 Home & oacute e; his butoh dance studios in Germany with Yumiko Yoshioka. Since 1997 he has worked with many different artists: Integro Group, LOT Theater, Ten Pen Chii Art Work, Yumiko Yoshioka, Guillermo Castrillón, Marisol Otero, Anushiye Yarnell, Yuko Kominami, Rafael Freyre, Melissa Pauchi Castagnetto and Sasaki.

Sara Pons was born in Barcelona in 1981. Trained in ballet and contemporary dance, decides to break with the technique and to investigate other possibilities of movement. His search takes her to Cuba, Brazil, Mexico and India. In 2005, knows the butoh through Ricardo Morera, des then, he plunges into the void of the body.

He has participated in the Moluccas and Ithaca Dance companies and currently serves on the other, along with Ricardo M Orera, and inutes, Balasch Aurora.