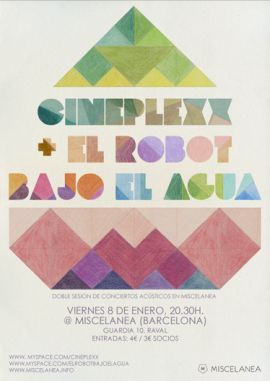 Double acoustic concert Back to School

"The underwater robot" is the name of the musical project of Nicholas Kramer (singer of "Jaime Sin Tierra"), accompanied by Lucarda (original drummer for "Jaime Sin Tierra" and solo artist with three albums released under this name).

At first, the proposal "The underwater robot" may seem simple, but once you hear each passage carefully we will realize the depth of each letter, which combines feelings of melancholy with a counterpoint of hope of the most touching. A cyclical experience that you should not miss.

Cineplexx
Cineplexx is Sebasti & aac ute, n Litmanovich, Argentine based in Barcelona, who is preparing a tour to promote his new album Nuevahola, recently published by the prestigious UK label Cherry Red Records. The album features collaborations with Duglas Stewart (BMX Bandits), Norman Blake (Teenage Fanclub), Federico Aubele and others. By way of advancement is presented alone and acústico.www.myspace.com / cineplexx