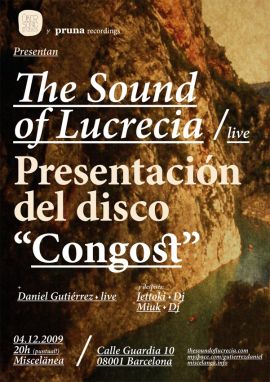 DANIEL GUTIERREZ + THE SOUND OF LUCRECIA

The Sound of Lucrecia. Producer, singer and instrumentalist who began making music in 2003 with a computer and voice. Since then he has been working steadily on your project, adding more and more items each time. Now their songs consist of melodic landscapes built by voices, guitars, basses, drum machine and a large p fin collected sounds, percussion and textures.

Congost is their latest release, recorded at home, self-produced and self released in October 2009.

In their live performances usually appears alone, and her songs are built progressively structuring the melodies and rhythms. From 2009 to accompany live percussionist Alexa nder Peterhaensel and a subtle modified projections made by real-time visual artists Ricardo Duque and Christopher Castile.
http://www.thesoundoflucrecia.com
http://pruna.thesoundoflucrecia.com/