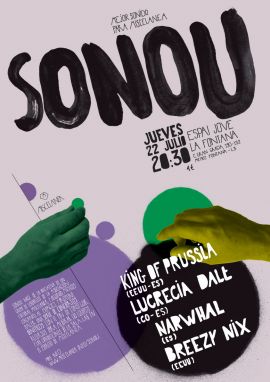 Mini-festival with the participation of groups of the independent music scene locally and internationally for the benefit of improved sound equipment to MISCELLANEOUS.

Sonou born from the initiative of a group of users of the cultural association Miscellany, and some musicians associated with the space and intends to make a series of benefit concerts to raise resources to improve equipment and conditions Lab ing room in the space of Miscellaneous.

With this initiative, we intend to adjust the acoustics of the room LAB, one of the few active spaces where local bands can publicize their work, offering sound quality both for musicians who present their projects in space as for the public to enjoy and Llosa.

With the support of the musicians have joined the project, the full contribution collected from the concert tickets will go to fund the purchase of equipment and upgrading of the room ... And in the same way, we invite all who wish work, no matter how small your contribution to the project website, d onde can make donations via Paypal. They also receive donations in the space of Miscellaneous and at entrances to the concert.

The experience of seeing live Dalt Lucrecia blurs the boundaries between studio and stage, recording and live. Weaving through & e acute; s loop atmospheric melodies with a refined staging that includes: guitar, bass, computer, midi controllers, voice and percussion, as a result, over time their songs continue to evolve and incorporate experiences and environments.
After changing the streets of Medellin for the Barcelona and contribute to the third EP in the series "4 Women No Cry " Gudrun Gut on Monika Enterprise, laid the foundation stone of his own label, Pruna Recordings, with an album entitled "Congost "

King of Prussia is originally an American band, but singer / songwriter has moved to Barcelona and now the group is a little more "inte rnational "- the live band includes a battery of Portugal, a violinist of Barcelona, Bilbao a violist and a vocalist of Ireland.

You may recognize acoustic guitars Neutral Milk Hotel in a pop song or songs in some other Mersey Beat, but you would be hard to identify a particular influence. Part of this difficulty ad to find a single musical reference in the sound of King of Prussia (Save the Scene in 2008 and The Time of Great Forgetting in 2010, Kindercore Records, USA) comes from the unique instrumentation in each of his songs.

But there is clearly "Prussian " in them, with lyrics that touch social issues, but political and macroeconomic Stute hidden between songs about love, innocence or lack of innocence, the home and the warmth of summer.

If you combine the rebellious spirit of punk rock with the melodic sensibility of Buffalo Springfield and the lyrical imagery of Magnetic Fields may get close to find out what this king cool.

Narwhal is the sound of two friends ever increasing understanding and finding joy in the process of creating a whole. Subirà Cristian (sometimes known as the Summer Recreation Camp) and Simon Williams (sometimes known as Jahbitat) played together for the first time when the old band Cristian (Coconot) invited Simon to form r part as the "fourth member " for a special concert in the summer of 2008. During rehearsals for the occasion, they both realized that they were exploring common ground in the process of sound creation. It came naturally ... more Today, during quiet moments together in a basement section to share visions and sounds channel two to feel full. As ideas emerge gradually and layers found your site mutants in multiple colors improvised space together begin to evoke the spirits of ancient ocean life, and finding quietly transforming the way from the water to the lands drónicas, through forests full of arpeggiated snakes as to reach a clear sunny where they meet to enter trances rituals with the help of explosives Antiritmo issuing the land ... Drawing from sources as scattered as the kraut rock, ambient, techno, shoegaze, noise, psychedelic pop, contemporary electronics, African music, drones and minimalism of Terry Riley's school, and the u so heavy batteries, bells, samplers, loop pedals, guitars, keyboards, bass, effects and vocal harmonies as
tools that are built from there is what the guide ... At present, they are preparing their first EP which will be released in early autumn 2010.

New solo project of Marijke Joritsma, one of the two members of Eats Tapes. Breezy tropical techno Nix is hypnosis. Who coconut oil spilled on the dance floor?