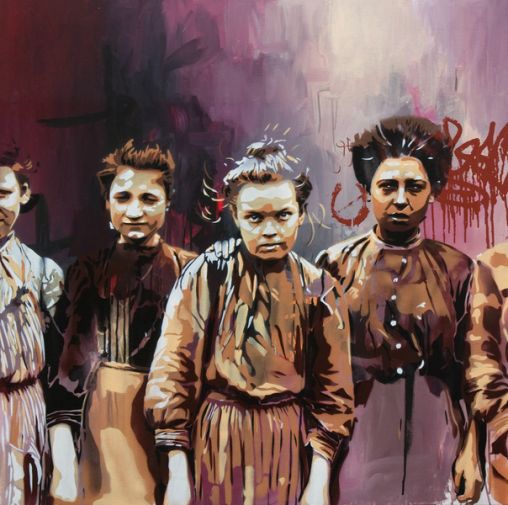 The passage of time is fundamental to this artist's work of Barcelona city. Women, very present in the work of Andrea's eyes are watching us, as the leading actresses of a film, but from the changing state of a wall.

He studied at l'Institut d'Photography Photographic Studies of B arcelona (20,012,003). His vocation as an artist street art began in 2002, the result of experimenting with other techniques free plastic and improvised nature (spray, acrylic paint, etc.) And the support of
walls of the street. Since then, he has painted murals on the streets of Barcelona.

His career as an artist has grown in parallel with the evolution of MISCELLANEOUS, since opening in 2005, Andrea Michaelsson has had several exhibitions and other activities within the space program.
Last year he participated in the Cans Festival in London, organized by Banksy, preparing murals and installations in a tunnel Waterloo Station. He has also exhibited in galleries in Los Angeles, London, Mexico, Barcelona and Brussels.

Pioneering cities to urban changes, the current division of labor, economic adjustment policies and the epicenter of the global era. Contemporary mega-cities have carried out some changes in the location of industry and the restructuring of public space co.

Textile factory girls want to refer to the past industrial neighborhoods transformed into desolate Paulato subsequently demolished to organize a new economic and social. Changing times, and cities generate messages for their dynamic overlapping between them, sometimes little understood by the saturation of information ng. The graffiti, as spontaneous as the reappropriation of the city by the need to constantly renew its presence in cities that systematically removed, layer by layer to impose themselves capitalism.
Do I need this frenetic pace of change?