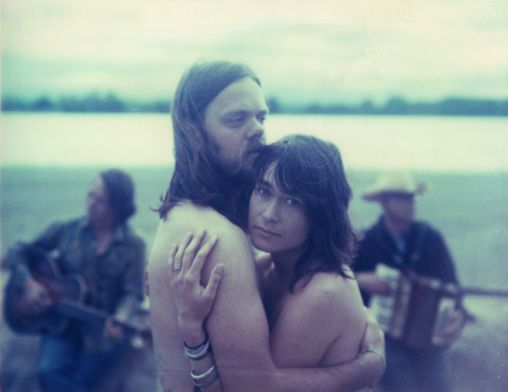 Based in Portland, Oregon, the band COME GATHER ROUND US was born of a longstanding creative partnership between its two founding members -- singer-songwriter Catherine Feeny and singer-songwriter/producer Sebastian Rogers. The two met in 2003, at a Los Angeles release party for Feeny's first solo record.

Rogers, who was signed to Dreamworks at the time, was moved by the honesty and vulnerability in Feeny's voice and lyrics. His career having been caught in an eddy of corporate takeovers for a numbers of years, Rogers himself was emotionally raw at the time. "It really felt like she was singing what was going on in my head," he says.

The two teamed up to make Feeny's second album in Rogers' native England, and in the process, they fell in love. But in the early months of working together, that outcome would have seemed impossible to an onlooker, and especially to the couple themselves.

"We argued constantly," says Feeny. "We were coming from very different places creatively, at the time." But with patience and communication -- and the genuine friendship that was developing between the two, despite differences -- Feeny and Rogers eked out a commonality and a mutual respect that became the foundation of COME GATHER ROUND US.

When Feeny's relationship with record company EMI ended in 2008, the couple decided on a fresh start in the Northwest of the US. They met guitarist Jon Neufeld (Black Prairie, Jackstraw) and multi-instrumentalist/singer-songwriter Mike Danner (Trashcan Joe) soon after arriving in Portland.

Both players were busy with several projects at the time, but they were intrigued by the music and the ethic behind it -- COME GATHER ROUND US was a band that would be about raw creation rather than polish, content over style. They recorded the album "Remember Where You Are" in a day-long live session just weeks after their first rehearsal and sold more than a thousand copies of the hand-made edition in homes and venues all over the US, Europe and Mexico.

The band's second album has had a bit more breathing room. The four recorded it in Portland with a small studio audience in the Autumn of 2009, but Rogers' burgeoning Stateside production career meant that the mixing wasn´t to happen until Summer of 2010. When the band came back to the recordings after months away, ideas came thick and fast about what might enhance them.

"We used a lot of restraint," says Rogers. "We had met so many exciting players in Portland, but we wanted to add one strong element to each song, not six." "We kept it simple," says Feeny. "We'd both been down that other road, and this was about exploring something different -- making more with less."

Look for the new album ("Despair?") in Fall 2010 at independent retailers. Keep an eye out for the band as well -- they might be in a venue down the road, or even closer -- they might be playing in your livingroom. On tour Fall 2010 -- England, Continental Europe, and Winter/Spring 2011 -- United States.