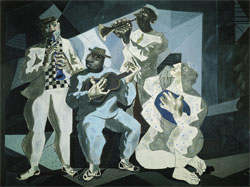 The 'choro' - 'cry' in Portuguese - can be considered the first urban music typically Brazilian.
The first sets of choro emerged around 1800 in Rio de Janeiro, former capital of Brazil, in the bars and terraces of the Rio's slums, and were the resource that the m & u acute; popular musicians used to play in their own way, sounding imported music from the mid-nineteenth century, in the ballrooms of high society.
The birth of the choro and the formulation of improvisation is 50 years prior to that of jazz, and was built in the same way that black American music: through a ju creative ego skillfully executed. This music is marked by the cleverness of its participants to stand out among others with complicated modulations, highlighting one more noisy, more restless, in an extremely flexible musical construction.
Like any street music, his style charact bristled by informality and lack of rules regarding the number of extras and instrumentation. What determined the role of the soloist was the ability, recayese the protagonist in the mandolin or the clarinet. In any case, good choro musician basic requirement was to be a good improviser.
The choro is today booming and has been rescued as tradition and musical aesthetic. The style spread of schools and the emergence of new tools now make this more gender-renewing Brazilian, attracting an ever more faithful.
The choro is today the younger generation of Brazil.