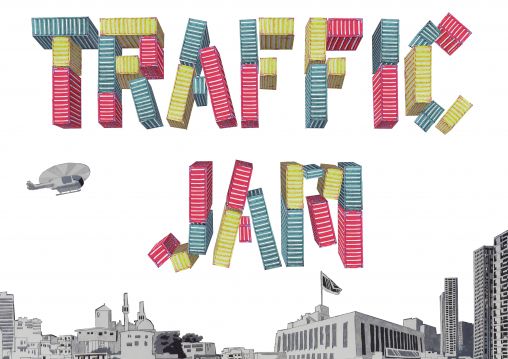 Born in Kosice, Slovakia, currently lives and works in Porto, Portugal. A graduate of the Academy of Fine Arts and Design, Bratislava, Slovakia. He works with painting, sculpture, video, animation, printing techniques and music.

Understand art as a form of language, where everything is possible, the jargon can be next to poetry to convey the message.

The tension between the real, often tragic, poetic and visual is why he uses the name "Flying Fish" (Flying Fish), the fish is one of the two worlds, the balance on the dividing line.

Oto Hudec's work explores the lives of immigrants, the TRA , Freight traffic, the alienation of urban space, where instead of creating judgments, prefer to bring the problem closer to the eye of the beholder and so provoke reflection.

To increase the impact of their work beyond the traditional galleries, often performed Hudec, interventions in public spaces years. His paintings have been installed on the streets of Slovakia, Portugal, Londa and San Francisco. His project "Million Stars Hotel" exploring different ways to document a landscape of Morocco and its people in the Atlas Mountains through a large-scale painting, video documentary and sketches. An essential part of the work was the daily interaction with l Hudec local population. Hudec has also conducted numerous "concerts for landscapes," including pieces performed at the edge of the Pacific Ocean and between Alpine snow-capped mountains.

In 2009, video-portrait of a woman resident in Portugal, Angola has been exhibited in the Mercosul Biennial in Porto Alegre, Brazil. In the same year f orm, Mariana Ribeiro, Van Driver, a creative platform for ecological essence interventions. His solo exhibition in Porto (Kubic Gallery), interprets the various stages of the life of an immigrant to be the centerpiece of an immigrant ship built with wooden fruit boxes.

Without realizing when and how we became a small part in trade and international traffic. The apple I ate this morning was from New Zealand, the computer I use to write this idea and s China, while in Mexico drink a beer, buying things in the Pakistani and Vietnamese food.

This exhibition is an experiment to look at the world from an economic perspective. A view with "macrolensing", capturing the landscape, buildings, cars, banks, ships, crowds.

Two large-scale drawings in the face wall against each other. Represent the simplified view of two worlds, the developed and developing countries. These structures, the same strategies are repeated around the world. The same brands everywhere. The borders are crossed, the market acts in the world and the tragedies are also global. We are already part of a world.