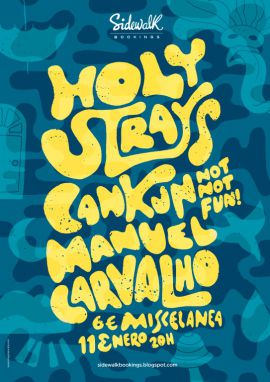 Cankun and Holy Strays are the pseudonyms of two of the most promising French producers of today. With several works published by Not Not Fun, have attracted the attention of sites like No Fear Of Pop, Tiny Mixtapes and Foxy Digitalis. The Portuguese musician Manuel Carvalho, who currently lives in Barcelona, will present his new Manta EP.

Holy Strays aka Sebastien Forrester, a young producer, based in Paris, offers intimate and equally massive beats. His grooves and frenetic rhythms are usually mixed with a dark atmosphere and organic. After a terrible accident with his laptop, which  lost his all songs, are almost finished for a second record with 10 musicians on Not Not Fun. Sebastien is back with 'Enlightenment' and leads to an exuberant journey from psychedelia and electronica track of dance. Just in over a year he made remixes for Forest Swords and Xander Harris and he have also shared the stage with Sun Araw, Prince Rama and High Wolf.

- No Fear of Pop: "Sebastien Forrester delivered stupendous pieces of music on cassette this year"

- Soundcloud
- Live video
- Facebook
Caylet Vincent has been active for many years, but Cankun is his most complete and fascinating project so far. Their music is part of the drone-dub of Not Not Fun.
- Foxy Digitalis: "these two full-lengths makes me all the more excited for its future past transmissions."
- Soundcloud
- Live video
- Facebook
Manuel Carvalho is a Portuguese musician and artist based in Barcelona. He makes synthetic psychedelic noise and drone elements. He will present his recently released EP "Manta".
-Soundcloud
Upcoming Events
No events to show
Archive
@miscelanea