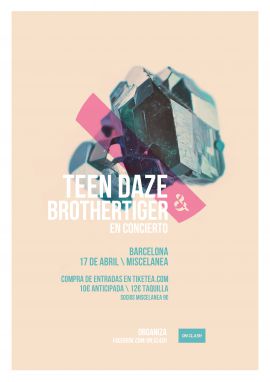 On Clash is proud to present Teen Daze concert for the first time in Spain. The Canadian project has submitted the bedroom after several years of prolific activity.Beside him, Brothertiger will debut his work on Spanish soil.It will be a very close and exclusive gold will culminate passing through Spanish territory.This event will have a very limited capacity, do not wait to have your ticket.Jamison (aka Teen Daze) presents his unique journey with glo-fi touches that strike us as the perfect soundtrack for summer days. Fully electronic music tone wave-cutenvironmental synth small flashes at half. His work to date has served to be recognizedas Pitchfork Media and The Guardian.Together b / w Something is his new job and will be published under his own digital labelCultus Vibes, which can be downloaded for free.Ohio native, will present their debut album Brothertiger Golden Years. His first single,Lovers, is halfway between the synthpop of Chromatics and swamps of Panda Bear,has been remixed by Jesse Ruins, House Mirto and Avec Avec.His music is an eternal ode to summer, combining sounds eighties new wave synth popwith lo-fi chillwave inheritance. Like Miike Snow lived in the lands of Washed Out.http://www.facebook.com/on.clashhttp://brothertiger.bandcamp.comhttp://brothertiger.bandcamp.com