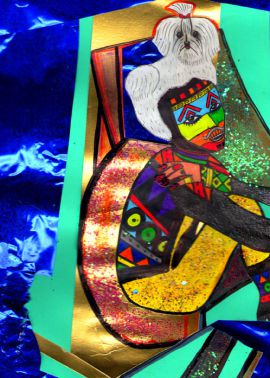 Manuel J. Grotesque is a man with a brain that works like a computer that spits crazy songs 200 kilometers per hour. His songs has ultra long stories about their dreamsor sexuality in contemporary society, with structures reminiscent of the classic animateddrawings from an experimental pop.

http://manuel.grotsk.free.fr/ Dudugeva: The original juice, land has delicious spit two beings, more than 4000 years.These two were the first humans to cross some plains today looted and over which we have founded our homes.These two creatures have preserved their nostalgic faces of yesteryear. She invented the language, something that was blatantly talkative and bubbly. He likes to roar as the ladies of the deer in rut. And he, a direct descendant of the womb of the earth, is in his image: round, good-natured and sometimes violent and full of anger. His guitar is a tree120 meters high. So try not to bother.They no longer speak in a while, howling like animals that some day we went and short syllables, "the ninth! Pee! Dudu! Gege! Baba".http://www.myspace.com/dudugeva/ Norman Bambi is French / English and recently moved to Barcelona.In 2007 he published his 1st album: "West Of Space Adventures", and in 2010 hereleased a split LP with Internet 2 in Cartilage Records.From since he has played in France, Belgium, Holland and Japan. He has also participated in the children's show "Carton Park" with which he toured in France, Morocco and Mexico.Norman Bambi also does sound design and music for the Miami art collective "Friends With You" and the new yorkeses Panda Panther.In concert using keyboards and a xylophone is super shaky booty and sings the songswith all the love in the world.http://normanbambi.bandcamp.com/