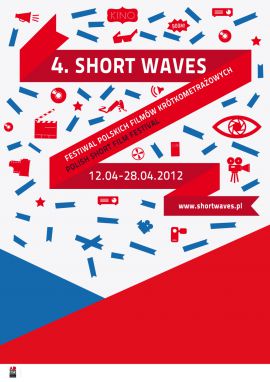 2012 marks the fourth time Polish Short Film Festival SHORT WAVES will travel across cinemas and venues of the world. Between 12th and 28th of  April Short Waves will visit over 30 polish cities, as well as few selected ones abroad (Berlin, Dublin, Helsinki, London, Porto, Prague, among others).

Main goal of the Festival - organised by Ad Arte Foundation - is to present and promote Polish short films. There are no restrictions on film genre, subject or style. This year the programme consists of 10 shorts carefully selected from over 220 applications. Among them are narratives, documentaries, animations, experimental films and music videos.

The audience in all participating cities will have a chance to vote for the best film. The Grand Prix winner will be awarded with 2 500 EUR. There will also be a special Short Waves PRO award of 1 250 EUR, assigned by the special jury of experts.

Get on the wave with Short Waves!

1. EVERYTHING IN ITS RIGHT PLACE / WSZYSTKO W PORZÄ,,DKU
Dir. Filip Lisowski / 2011 / 11'
An orderly boy, his birthday and the prose of life: dust, dirty dishes, mess. A subtle story of friendship and obsessions. For the last 2 minutes of the film the hero shakes his head.

3. SLEEPINCORD / SNÄ~POWINA
Dir. Marta Pajek / 2011 / 14'
An animation from the border of a dream and consciousness. About difficulties with getting up in the morning, an uneaten borsch and the titular sleepincord – the wire connecting amniotic fluid of dreams with placenta of reality.

4. THE CONVERSATION / ROZMOWA
Dir. Piotr SuÅ,kowski / 2011 / 17'
A documentary story of a young woman on a prison pass. The whole universe of new feelings and emotions awaits her. Unusual narrative method is the contribution of both the director and the heroine.

6. THE STRONGWOMAN / SIÅACZKA
Dir. Aleksander Pawluczuk / 2012 / 7'
A documentary about a strong woman – literally and figuratively. The heroine – Dorota Jadczak – doesn´t lose her charm, even when flexing her muscles.

7. ISLA
Dir. MaÅ,gorzata Grygierczyk / 2011 / 1'
Moving pictures? A moment of concentration. Have a look and you might see.

8. NOISE
Dir. PrzemysÅ,aw Adamski, Katarzyna Kijek / 2011 / 7'
With your ear against the wall it's easy to mishear. A short story about noises invading human's life. Comically visualised sounds become a part of visible reality.