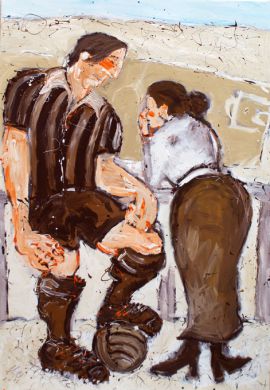 Julio Arriaga. From Bilbao, graduate in Fine Arts, lives in Barcelona. A figurative expressionist painter quite more handsome than his coetaneous. He is also known as elartixta.

The self-styled "Artixta" paints - since 2002 - in a studio-workshop at street level, in the Gràcia district of Barcelona, melee with their audience, showing not only the final work, but also something that in his opinion have the same importance: the creative process. His "Xtudio" answers at the interest of Arriaga for "making the world of painting something as popular as music, where everyone can express their opinions without fear, and where it's normal possessing an original elartixta's work in his own home".

Gaining an international fame, Arriaga has also held exhibitions in Belgium, Argentina and the Dominican Republic.

In 2002 twelve states of the new XXI century Europe embrace excited to receive a new currency, the euro. Meanwhile, in a small venue in Barcelona, July Arriaga-elartixta-fresh from his green Bilbao spends hours painting between unsuccessful mathematical calculations to determine the actual price of a baklawa. Today, ten years later, with a pocket full of coins, Julio Arriaga and his work lands in Miscelänea with a representative show of the last decade works' collection that makes him win an international fame. By this conclusively way he commemorates this decade in Barcelona. This is "Mar i Muntanya". "Mar i Muntanya" exhibits at least one piece of "elartixta" of each held years. Among the highlights of this periplus, he includes his Ode al Ocio, with the trilogy Entresiestas, Lectores and Castillos en el Aire, and already legendary series as Udazkenean, Retratos de Cine, Gargantua o Fútbol El 11° Arte.