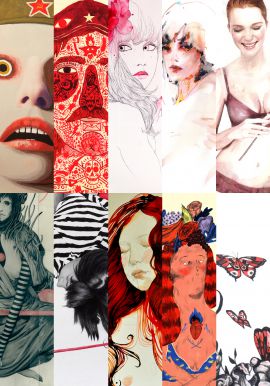 Search for artworks by

He's born in Manila, growing up among Japanese influences and classic cartoons.

He defines his style "Sukiyaki Western" as a marriage between Japanese art, streetart, and low-brown illustrations. He is a multidisciplinary artist, and it allows him to handle both the commercial as the more contemporary demands. He has worked for Facebook, Nike, Tiger, Ogilvy, Yahoo Southeast Asia, National Arts Council of Singapore, Nestle, etc ...

His works are recognized everywhere: they has been showing in galleries in Japan, Shanghai, Singapore, France, Belgium, Germany, New York, Spain and more recently in Hong Kong.

Search for artworks by Anjo Bolarda

He studied at the Llotja School of Arts and Crafts, where he's been specializing in illustration and mural painting.

He is an expert of trends illustration, always looking for new medios and supports.

His work appears in different books like "2illustration now" edited by Taschen and "Atlas of Contemporary Illustration" by Harper Collins.

Search for artworks by Berto Martinez

He studied Fine Arts at the UB (University of Barcelona) and at the Ecole National Supérieure des Beaux-Arts in Paris.

He focuses his works on the arts of drawing and illustration without rejecting experimentations with other techniques, such as photography or installation.

He takes part of the collective "Penique productions": A group of artists, dedicated at different disciplines, that realize temporary performances  with inflatable colored that occupies the whole spaces, giving them new identities.

His illustrations came from realistic images to which he always adds graphic elements so as making the image more powerful.So that he disengage himself from the hyperrealism meanwhile he looks for another side of reality.

American artist ever in evolving and learning.

Her illustrations, photographs and paintings have appeared in publications and galleries around the world. Some of his clients and projects include Urban Outfitters, Lady Gaga, Hallmark, Stone Volcom, Element, Nylon Magazine, Inked Girls Magazine, Eyes on Walls, Threadless, Bolia and Society6.

This young artist has become a reference yet. His works have been exhibited in Barcelona, Madrid, Porto and Los Angeles.

He has worked for different projects in advertising agencies, design studios, publishing editorials and newspapers. Customers include brands such as Zara, Adidas, Coca Cola, Editorial Oceano, Filmax, Periferiaestudio, Escletxa or Bubel and Globalrhytm.

He actually works both as an illustrator and as teacher in BAU. His drawings have been published in magazines like lamono, Hmagazine, LeCool, DevoraRan and The Childrens Book of American Birds.

He studied Fine Arts at the University of Barcelona.

His works have been exhibited both in spanish galleries like Sala Pares, Artevistas, Esther Montoriol and in international ones in Strasbourg, California or Vancouver.

His pictorial research starts from the study of the human condition, treated with humor, irony and a strong degree of provocation: a reflexion on a society full of taboos and subjected to a visual tyranny by television, advertising and, of course, fashion magazines.

João Ruas is a visual artist from São Paulo. He studied Graphic Design and, before turning himself exclusively into illustration and his personal works, he worked in graphics studios in the UK and Brazil.

His work has been exhibited in many galleries all around the world, in cities like Los Angeles, San Francisco, New York or Miami.

Search for artworks by João Ruas

Mariana Santos, known as "Mariana, a miserável" (the wretched) studied graphic design at the Escola Superior de Artes e Design (Caldas da Rainha), where she developed a taste for the "no-saber-how-to-draw".

Two years ago she moved to Porto where she has actually been attending a Master in Graphic Design and Editorial Projects in FBAUP. In addiction to study, she is involved in several illustration projects: she is  Director of the Illustration Department at JUP and moreover she's been participating in many exhibitions (collective and personal), small publications, collective murals and design posters, calendars, magazines and books.

_Buy artworks by Mariana a miserável

BSA on Fine Arts at the Polytechnic University of Valencia, completes her education in Santiago de Chile, New York and Urbino.

She focuses on engraving and oil painting techniques, introducing illustration in her works in 2009. Her drawings have been exhibited in Madrid, Barcelona, Valencia, Porto, Paris, London, Belgium, Urbino and Berlin.

Her work, full of poetry, ends up with the publication of several books that she both writes and illustrates. “Qué hacer cuando en la pantalla aparece The End” (Lunwerg, 2014) and “813” (La Galera, 2015) -a tribute to the French film director François Truffaut-, are her most well-known projects.

What do ten artists have in common? The answer is red.

Rojo rojo is the result of the idea of five local artists who decide to invite 5 of their international referential artists that they follow through social networks. They don´t known them personally, if not just through the social network, but thanks to this virtual contact they realize working "in pairs" while each one creates his own work.

The result are ten heterogeneous works with just three common elements: the size, 70x70cm, the support, paper, and a color: red.

So that, coming from Manila, USA, Brazil, Madrid and Portugal, the works by Anjo Bolarda Anjo, Charmaine Oliva, João Ruas, Ricardo Cavolo and Mariana a miserável will be shown along with the ones by Berto Martinez, Conrad Roset, Chamo San, Guim Tio and Paula Bonet.

A perfect excuse to meet some of the best referential artists of the contemporany figurative illustration.