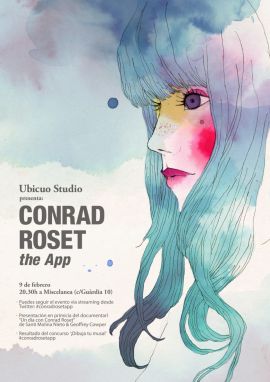 'Conrad Roset, the App' is a pioneer App for iPhone and iPad. It's the first App of a living artist created to invite the users to modify the artworks of the artist himself. Conrad Roset is an internationally recognized illustrator based in Barcelona who works for brands, publishing houses and, above all, who's creating stunning personal works. In this App you'll find a retrospective of Conrad Roset artworks and a report about his life and friends/colleagues.

Ubicuo Studio is the publisher of 'Conrad Roset the App' , a pioneer multidisciplinary studio dedicated to create projects in the fields of culture and technology.

This App will also held a contest in which Conrad Roset invites his followers to create their own versions of his muses using the App and posting them to twitter under the hashtag #conradrosetapp. There will be a launching party at Miscelanea Gallery (C/Guàrdia, 10 - Barcelona) on 9th February at 20.30h in which the winners will be announced.