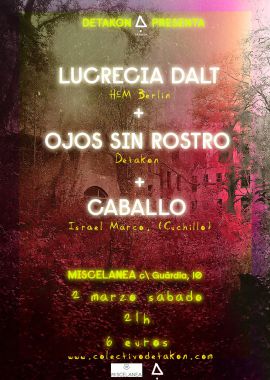 LUCRECIA DALT
"With her sophomore album, Commotus, Barcelona pop luminary Lucrecia Dalt crafts a surrealist landscape borne by the inexorable scope and sand-swept surfaces of geologic time.
She leaps into a surrealist landscape with stunning abandon, eschewing the comparatively safe tropes and song structures of her previous work. And she charts a surprisingly inventive and rewarding territory in the process. Much as it is with her newfound contemporaries at HEM Berlin, for Dalt, solitude and assemblage (of sound, genre, musicology, technique) is an exploratory zone steered toward the inner universe. To follow the music, one must be prepared to make this trip as real as sound itself."

OJOS SIN ROSTRO
The band formed by the brothers Rodríguez Tena started it's activity in 2005, in Cambrils (Tarragona), when Dani Cardevore, Cristian de Sucre and Larry, in a reunion after a long season in which each one lived in a different city,  decided to start playing motivated by familiar reasons.
At the beginning, without nearly no instruments, the brothers played to extract sounds and rhythms from the familiar house hall's furniture, using crystal bottles or the chair's legs for doing more percutive parts or an old guitar, their voices and moans for plaiting melodies. Illusionated and tensed and at the same influenced by the period's events, the advances in the sessions together and the connection and trance state recently discovered in the moments of rehearsing and creation, make that the trio started, little by little, to obtain, from whichever form, all kind of equipment and instruments with which be able to approximate to the common idea of sound that was beginning to reveal from the triunvirate's heads.
These lines intend to give more light to a part of the beginnings of Ojos Sin Rostro, from which there is nearly nothing written. Currently, the band is going to start the recording of it's second album, "Europa no lo reconocerá", which will be edited by Detakon in the next months of 2013. Some of their new songs will be heard in this concert.

CABALLO
Caballo is the artistic alter ego of Israel Marco, composer and alma mater of the band Cuchillo. His music is emotional, discreet and enigmatic, but always beautiful. Israel is a an accurate and versatile guitarist, a sculptor of the six strings with a musical vision that could be situated next to a tradition that includes epochal guitarrists like Roy Montgomery, Keiji Haino, Robert Hampson or Manuel Göttsching. A rare occasion to sight and contemplate the beauty of this singular equidae.