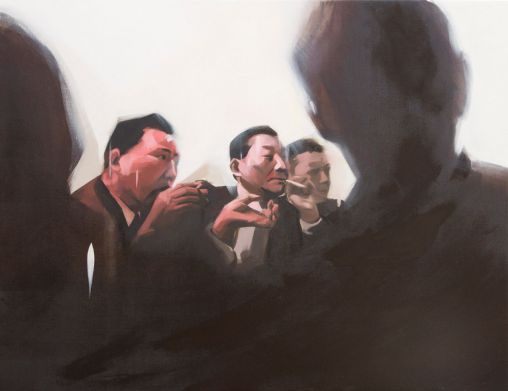 The artist Federico Garcia Trujillo poses the possibilities of painting as a means documentary in which it's included two projects which investigates this route:

1 - photographs that I dislike:
This project seeks to demonstrate the latent conflicts within documentary photography, is a review of the problems of the photographic medium as an objective  mean through which aim to represent social conflicts as being a full mean of subjectivity as painting. The ultimate goal of the project is to explicitate how hyperesthetic strategies can deactivate the subversive contents of a documental piece.
The main idea of the proposed model was derived at Martha Rossler's work where the photo deactivates its potential subversive in response of a technical or esthetic virtuosism excess and transforms it in a victimist representation. To explain this mechanism he proposes a reinterpretation of Minamata Series Images of Eugene Smith and his wife Alleen Mioko, which ,on the early 60s, both denounced the human devastation that took place in Minamata (Japan) due to irresponsible Chisno chemical company growth, pouring mercury waste at sea. In this series rather Smith provides a representation of his compassion for the Japanese fishermen contaminated by mercury than a representation of the struggle of the latter to be penalized the company that polluted waters. The reinterpretation of these images is implemented as a copy in oil tecnic using an expressionist style, making an analogy between the style of photojournalism with Abstract Expressionism, ironically to the aesthetic character which has the explicit images and loss of subversive content of these photographs to as happened with pictures faithful to Greenberg's formalist theories. The election of choosing a large format canvases is for remarc the  spectacular and morbid character and sheds the instrumental sense than the images owned in the '60s.

2 - Spanish exodus II:
During 1935 and 1940 Dorthea Lange and her husband Paul Schuster Taylor, prepared "An American Exodus, A Record of Human Erosion." A book which mixes text with pictures, analyzing the phenomenon of migration motivated by economic depression of the 30s. In summer 2007 began a period of global economic recession with the subprime mortgage crisis, triggering just a lot of economic turmoil in the eurozone, with great confidence to the sovereign debt of many of the southern European countries. In 2012 Spain looks how the 25% of the population is unemployed, been more virulent in those under 25 years, which reaches 50%. This situation triggers a large stress in population, they see as much of the new generations, seeing inaccessible the access of a job commensurate with their training, decides to leave their home country in search of better opportunities. Spanish exodus seeks to represent the current immigration status through an analogy with the images produced by Dorothea Lange, raising the question of whether to generate new images around this problem and suggesting the possibilities of painting as a tool of photography and historical review.