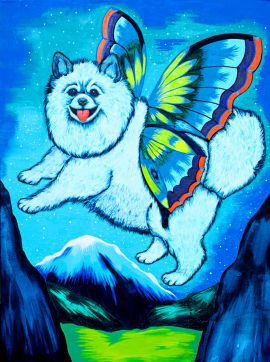 In this series of paintings, Vera Elena Solodovnikova, represents what will be the Earth when humans disappear completely from the world, and only animals dwell. After the extermination of the human race on Earth, will begin a new era in which animals dominate the planet, developing their own cultures, traditions, customs, beliefs and religious cults. The times when the animals were raised to the rank of the gods again, as in ancient times, where animals played a central role in religious beliefs and myths, a time when it was believed that they possessed supernatural powers and during which they were revered as heroes, not only cultural but also as creators of cultural traditions that have lasted for centuries.