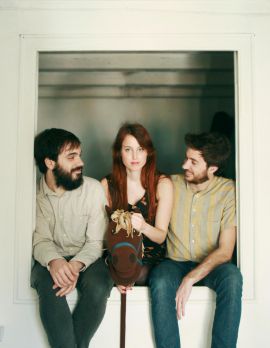 The adventure of "Her Little Donkey" begins in the summer of 2010, when Carlos Aranda and Carlos P. De Tudela decided to pool certain musical ideas that they roamed the head. Formations from both sound totally alien to Her Little Donkey, decide to embrace the pop and folk without neglecting some electronic concerns.
After trying unsuccessfully with different musicians, in late 2011 decided to dispense with the figure of the battery to replace it with a nice drum machine and add to your project to Ana Lopez, multi-instrumentalist, which in turn brings with her voice and twist. Already as final trio decide to focus your pop music with electronic and begin to compose the first pieces (Colombo, Not Ready), in addition to adapting old songs that Carlos had done as a duo (Probation, Dark Waters). In May 2012 they made their first public appearance in a brief performance in the Raval.
For this 2013 is expected to Her Little Donkey has made a handful of hits that shape his first work.