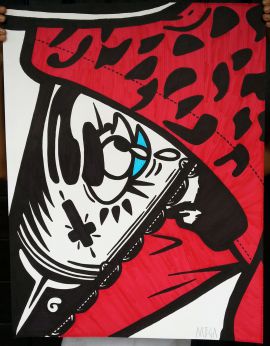 The French illustrator from Bali. Mega brings his imaginary jungle, full of masked warriors, fierce girls, ceremonial objects and other colorful wildlife.
Mega have lived in Brazil, Argentina, Australia and now decided to locate his office in Bali, the island of the gods.
You can find his illustrations in advertising Nike and Volkswagen, and in publications such as Complex magazine.

Search for artworks by Mega
exhibition

KIRTIMUKHAS is a graphic reflexion over self-created rituals and simulated heritages. The art show questions self-defined identities by exploring the pre-Indo European practice of wearing masks for practical and ceremonial purposes.

THIS SERIES OF NEW AND EXCLUSIVE ARTWORKS has been hand-drawn with premium alcohol-based sketch markers on fine art paper.

THE SOLO EXHIBITION solo exhibition is part of a larger saga the artist develops throughout his various art projects.

Kirtimukha is a Sanscrit word for a swallowing fierce creature in the Hindu culture.

Kirtimukha is the name of a mythical monster created by Lord Shiva. The story is found in the religious text called Skanda Purana. To make a long story short, the God of destruction decided to create a monster to punish a king who had insulted him. After Shiva eventually kills the king Himself, He asks the beast to eat his own body, starting from the tail until only the face is left.

He then gives the monster the name of Kirtimukha which means “glory face”.