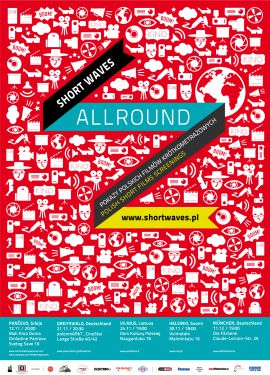 KATACHI / SHAPE
PrzemysÅ,aw Adamski, Katarzyna Kijek / 3’ / animation
Second life of memories that for a moment stop being features of nostalgia. They start coming in shape, katachi, in the video clip. A speeding parade of two thousand elements summarises the story of a great journey and creates a certain catalogue of postcards that sends greetings in a breakneck pace from the world of imagination.

VOCUUS
Patryk Jurek / 16’ / drama
After his wife’s death Pawel stays with his little daughter. Now he must play the role of mother-both metaphorically and literally. When he finally finds a solution and his kid starts to understand the tragedy better, the same solution brings him to court.

STRAÅ»NICY / THE GUARDIANS
Krzysztof Szot / 15’ / drama
- SHORT WAVES PRO 2013 Award –
A path in the forest is enclosed with a barrier on a rope. Next to it there is a station made of bricks. Young Marek doesn’t know how he’s got here and the old guardian might have already forgotten. Marek likes the cold of his gun made of steel because it seems as if he had a hot hand. The old man likes television because his service is over. Marek is going to stamp the furloughs and that’s the whole job. Or so it seems.

O RZÄ,,DACH MIÅOÅ¨CI / THE GOVERNANCE OF LOVE
Adela Kaczmarek / 13’ / animated documentary
- GRAND PRIX SHORT WAVES 2013 –
A documentary about an unusual man or maybe a postulate of being usual. An animated philosophical treaty spoken with a common language of heart. The patient of life tells the story of his illness and depicts it with his own drawings. He saw a lot and spoke to important people. A beautiful war with Hungary is, among others, in the background.

Å¨WIÄ~TO ZMARÅYCH / ALL SOULS’ DAY
Aleksandra TerpiÅ,,ska / 18’ / drama
It doesn’t seem suitable to be born on November 1st. However, Lena found the date suitable. On the day of her eighteenth birthday she needs to light candles not only on her birthday cake but also on a grave. She’s got used to it but this time will be different. An age-connected breakthrough evokes in her the desire to solve certain mystery. Lena decides to grow up.

UMIÅOWANIE Å»YCIA / TO LOVE LIFE
Piotr Bosacki / 12’ / animation
The narrator reads a certain study devoted to the construction of the world. He introduces equations for mechanisms of nature and mores. Scientific arguments sometimes distract poetic vulnerability. He seems amazed. He calculates. He illustrates critically and symmetrically. Intertwining of layers creates a structure of a literary film.

WSPOMNIENIE POPRZEDNIEGO LATA / A MEMORY OF LAST SUMMER
Kuba GryÅ 1/4 ewski, Ivo Krankowski / 10’ / drama
Legendary winters of the 1980s might have been severe but from time to time the temperature was surprisingly high. A seemingly prosaic episode will be a heart-warming recollection for the characters of the film. It’s a story told through the so-called steamy glass but at the same time it also sheds some light on the mystery. Love with a human blushing face.

CO SIÄ~ DZIEJE, GDY DZIECI NIE CHCÄ,, JEÅ¨Ä+ ZUPY / WHAT HAPPENS WHEN CHILDREN DON’T EAT SOUP
PaweÅ, Prewencki / 2011 / 9’ / animation
Soup allows to satisfy hunger but not child’s curiosity. Two little heroes can find satisfaction only in adventure. When they run away from the table, the grandfather decides to teach them a lesson. His spells close all the doors. An innocent fad has severe consequences. And the soup is getting cold.

BZOWINA
Hubert NapieraÅ,a / 4’ / drama
There is no use keeping a birchwood that stopped giving juice. The collector has no solution but to cut it down. However, this time it turns out to be not so easy, the tree seems to fight back.