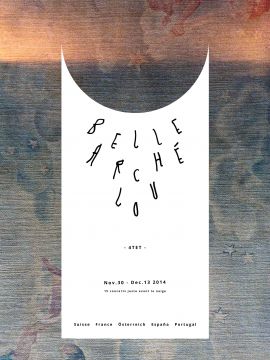 Belle Arché Lou is a music project led by the Paul brothers, Wesley and Alexis, that was birthed out of a vibraphone and a classical guitar.

How are French literary figure Guillaume Apollinaire and American astronomer Scott S. Sheppard - University of Hawaii graduate interested in the formation of solar systems - linked? There is no a priori reason to think a connection exists. They are 3700 miles and 58 long years apart. And yet, their relation to beauty and their determination to establish that beauty bring them closer together.

Among the hellish atrocities of war, Apollinaire wrote some of the most emotional verses in the name of an almighty love and did not hesitate to compare the deadly shells to "wonderful suns ripening in space". As for Sheppard, he discovers planets and hunts moons. Both men fight the same fate: things that are imposed whether militarily, socially or culturally. The poet fights the war and the astronomer fights the knowledge of the universe. They both make the world sublime or present new worlds through writing and discoveries, through poetry and science. They are connected by the fierce fire of transcendence and by their respective satellites ensuring the pursuit of essential trails against perdition. Apollinaire's satellite is a woman, Louise de Coligny-Châtillon known as Lou, whom he loved unwisely. Sheppard's satellite lies in secret stars, orbital moons he discovers - one of them being called J XLIII ARCHE and more commonly known as Arché. Thus, Belle Arché Lou lives only to embody this truth. That beauty needs no words to exist, that vertical beauty triumphs over all, whether in the dirty trenches or in the frozen space of the milky way. Belle Arché Lou plays in an effort to remember that beauty, to destroy the sorrow of the world, to tremble when spellbound. Belle Arché Lou is no more than that: a music project that is led by the Paul brothers, Wesley and Alexis, that was birthed out of a vibraphone and a classical guitar, and that pays homage to those freedoms.