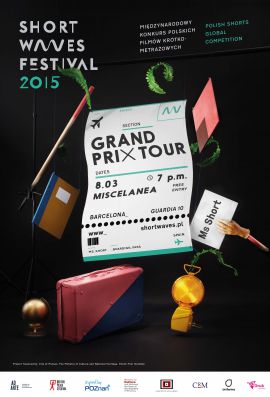 Short Film Festival Short Waves is one of the largest and most prestigious film events in Poland. This time the wave is bigger than ever! 7 titles (selected from among 250 submitted applications), including documentaries, animations, video clips and fiction films, will compete in this extraordinary competition to obtain the award of Polish and World audience.

SHORT WAVES comes back to MISCELANEA for the 7th year and you don't just watch the selected video but you can be a jury member; the audience from the all world can vote for the best short film.

The Supreme, dir. Katarzyna Gondek
Documentary, 20’, 2013
Katarzyna Gondek brought her video camera between the majesty and the grinder. She took a pious look on the biggest pope in the world: a 14-metre-high statue of John Paul II made of composite. As a result, we are watching with disbelief a documentary about a belief that constructs.

Fish emade tworzywo - Dust,  dir. Marek Skrzecz
Video clip, 4’41”, 2014
There have been many literary works and films about Polish holidays. Marek Skrzecz complements this collection with a video clip about a holiday that happens 52 times in a year: Saturday. Dust is a story of a brilliant tractor driver who is able to dance the transformation of Polish countryside.

A Blue Room, dir. Tomasz Siwiński
Animation, 14’26”, 2014
Tomasz Siwiński painted pain. He painted it with blue which is considered a soothing colour. Together with the main protagonist we end up in a closed room where there is only a view but no way out. Don’t try to break the screen.

Fragments, dir. Aga Woszczyńska
Live action, 25’, 2014
The world presented in Fragments falls slowly apart. A pair of protagonists renounces reality in a designer dungeon taken on credit but there is no place left even for emotions.If you feel cold during this film, it is not because the air conditioning got broken.

That Would Be Beautiful, dir. Anna Morawiec
Documentary, 17’, 2014
Mrs Aleksandra keeps both feet on the ground. That is why she has decided to live on Mars. She made her decision after she had found out what kind of future the Social Insurance Institution (ZUS) prepared for her. Anna Morawiec provides a profound research on the relationship between Polish pension system and the universe.

The Dumplings - Technicolor Yawn, dir. Arek Nowakowski
Video clip, 2’22”, 2014
You have certainly experienced a lot. You have seen it all, been to many places and spoken with various people. Right? Now you will experience, see and hear even more. This juicy video clip lacks only boredom.

Baths, dir. Tomek Ducki
Animation, 4’20”, 2013
Here there are two old women who are getting into the water once again to swim their usual distance. This time will be different, the other way around. In this unusual animation by Tomek Ducki the double bottom exists for real.

THE VIEW BEHIND THE SEA