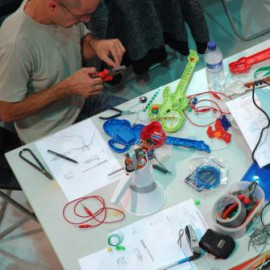 Circuit Bending is a creative modification, in order to create new musical instruments and sound generators. Many of these devices end up being used as instruments in certain forms of contemporary experimental music, random and improvised.

(You will need to bring one or two toys or electronic devices to modify.)

Juan Matos Capote is an experimental artist, audio and visual, of the Canary Islands. Since 2008 he has lived in Barcelona, â€‹â€‹where he moved after living thirteen years in New York. He has participated in various music festivals, including: Dis-play 11 @ Transmediale, Sónar 2010, Storung 5.0, Cicle Hum, Gargall, Cap Sembrat, etc. Matos Capote holds the title of Master of Fine Arts Degree from Pratt Institute, Brooklyn, New York, and has been the recipient of a Fulbright scholarship. He holds a degree in Bellas Artes from the University of La Laguna (Tenerife). From 1992 to 1994 he studied at the international Higher Institute of Fine Arts in Antwerp, Belgium. He has had exhibitiones in Europe, North America, Australia and Africa.